I’m spending July in Bangkok, Thailand. This marks my first foray into Asia. Here are some observations and photos from my first two weeks in the city.

The heat, for the most part, hasn’t been as bad as I had expected. My coping strategy includes limiting my time outside during the peak sun hours of late morning to mid afternoon. I find that if I wait until the sun goes down behind the buildings, walking in the shade makes a huge difference. I’ve also learned to recognize the importance of staying hydrated. I am always sure to keep a large bottle of water on hand at all times.

The best part of Bangkok is the food. There are all kinds of delicacies to be had at very reasonable prices. You can enjoy a variety of Asian cuisines here. Yesterday I ate some fresh sushi, today I feasted on a Vietnamese dish. The noodle dishes here are great. If you like seafood, there are tons of soups. I had one that came with fish balls and some kind of squid or octopus suction cup floating around in it.

I stopped at a noodle restaurant that offers small bowls of noodles at a cost of 13 baht each. That’s about 37 cents in Canada. Customers usually order two or four at a time. As I ate my food, I noticed many of the staff were watching me eat. Eventually, two waiters (who weren’t assigned to me) approached me and asked if they could pose for a photo with me. One of them sat down next to me and leaned right up against me. I was worried that I was about to be pick-pocketed. I think they will be posting the photo on their screens in the restaurant. I regret not asking for a copy of the photo.

Thai and Asian beer isn’t great. Even after a year in Hungary, which is more known for its wine than beer, the drop off in taste is substantial. 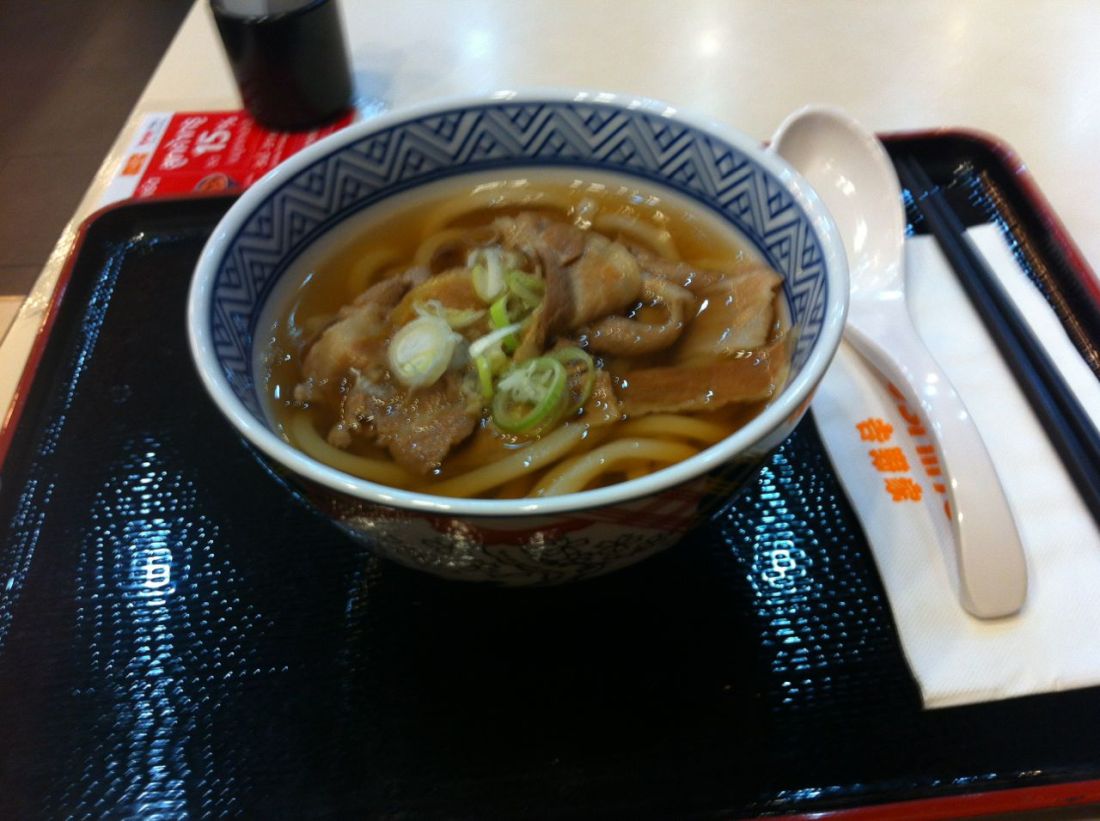 It is cheaper to eat out than to cook for yourself. The other day I made a trip to the grocery store to pick up some items to bring home with me. I bought some Penne pasta, tomato sauce and a small bag of grated cheese. The bag of cheese cost a whopping 202 baht, about $7.50 CDN. To put that in perspective, a meal of meat and rice or noodles can be had at any mall for between 50-90 baht. One small bag of cheese cost about the same as three meals out.

Until you get here, you can’t appreciate the size and sprawl of the city. After spending time in an extremely walkable city like Budapest, I’m now in a city where cars are the default mode of transportation. Traffic jams are the norm here, even at 10pm. Getting around takes time. If you want to go anywhere, you’re advised to set aside 45 minutes to an hour of travel time. I am renting an apartment close to the Skytrain, Bangkok’s new public transit system, but even then, it still takes me time to get anywhere. The Skytrain is comparable to the S-Bahn in Germany. The stations are interspersed by a considerably amount of distance.

On my first day, I went to visit one of the Buddhist temples (Wat Pho), home to a giant reclining Buddha. To get there I took a boat that runs along the river. A one way ticket costs 40 baht. After visiting the temple, I took a look at my map and figured I could navigate my way through the old city on foot, to the nearest Skytrain stop. I estimated it would take me half an hour, maybe an hour. The map I picked up only shows the main thoroughfares and not very accurately. I ended up getting lost, wandering for a couple of hours through Chinatown.

Chinatown in this part of the world is not like what you see in Ottawa or Montreal. It’s a lot more…intense. There were little street markets everywhere, selling fresh food. Carcasses of chicken and meat were hanging out with flies buzzing around them. There were all kinds of interesting smells. It was loud and crowded. People were sitting and lying down on the ground, some of them eating rice. I walked through these little passage ways with all kinds of shops and markets selling food, gold jewelery and trinkets. I was soaked in sweat. Eventually I found my way back to another section of the riverbank and caught another boat back. Looking at the map, I logged about 4 kilometers in the afternoon sun. 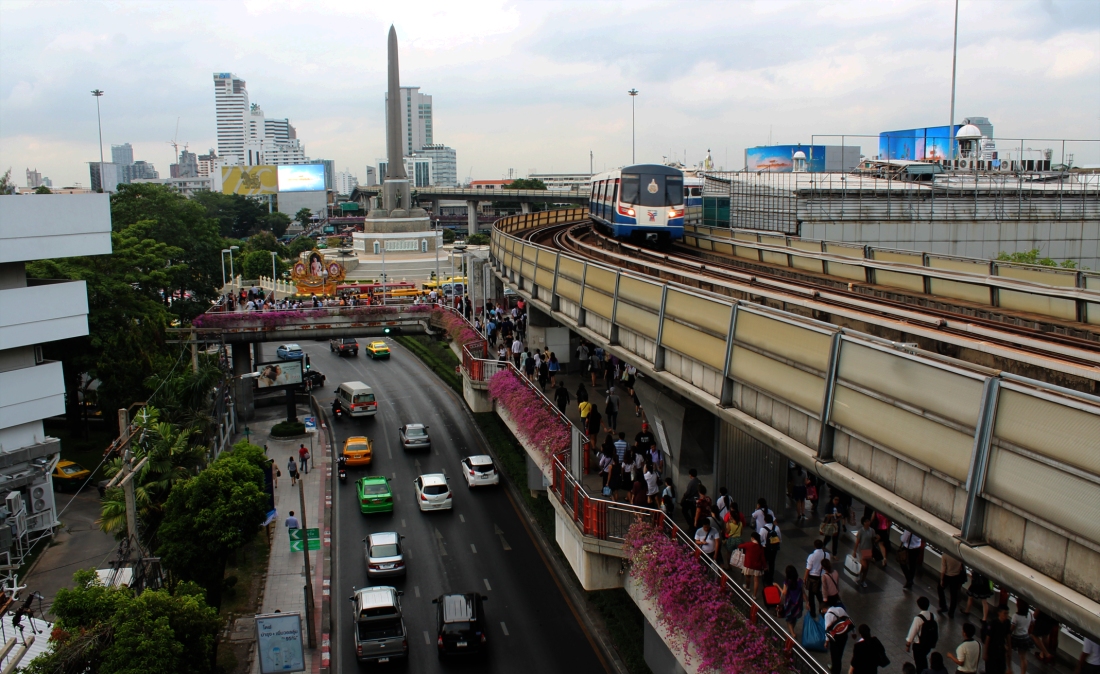 Dairy Queen soft serve ice cream cones have become my go-to treat here. A large cone only costs 15 baht. Great on a hot day (which is every day here).

Khao San Road, the famous backpacking party destination, had more tourists than Thais enjoying the nightlife on the night I stopped in. It was crowded. As you navigate your way through the throngs of people, you pass food carts selling roasted scorpions on a stick. 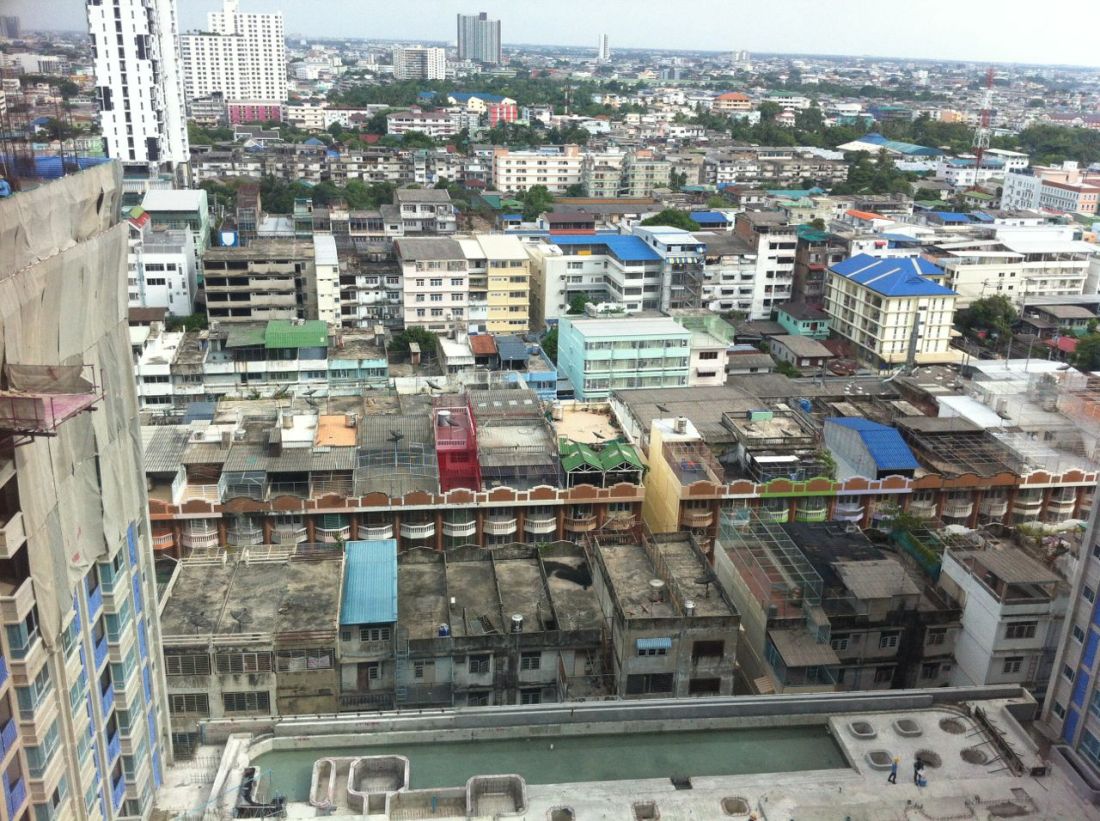 My condo is in a residential section of the city, away from the tourist spots. People stare at me when I walk around, especially when I am in my local mall running errands. 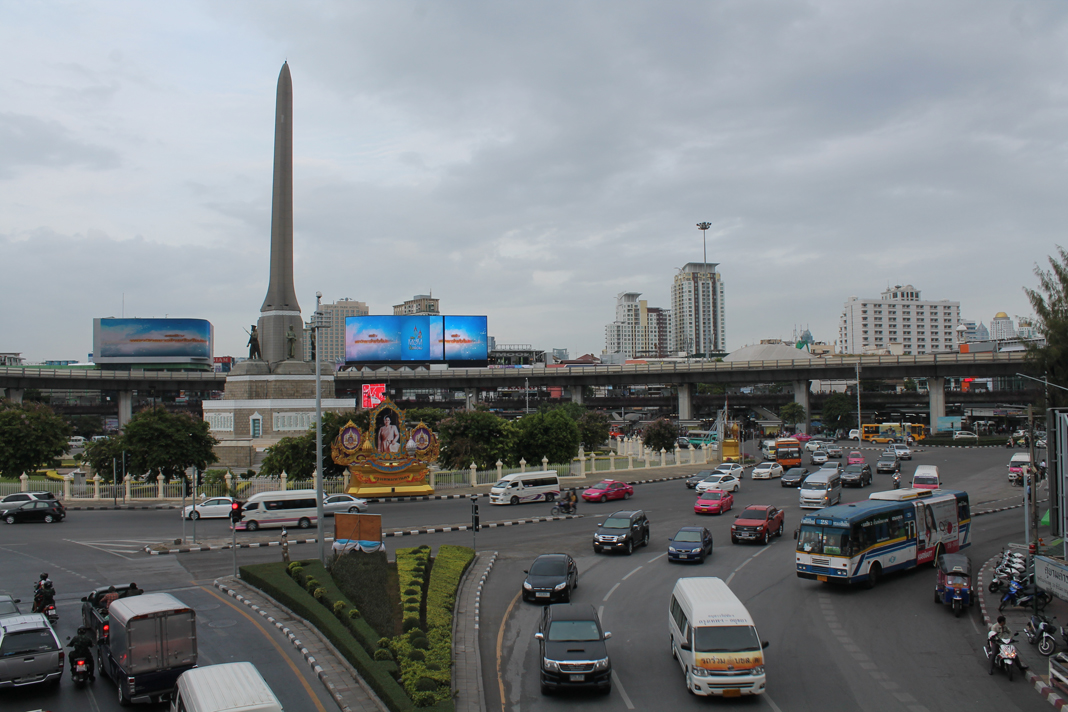 A smartphone plan with 900mb per month costs 199baht, about $7 Canadian.

The malls here are elaborate. Many have not one but two floors dedicated to restaurants and a foot court. One of the largest malls, Terminal 21, features six floors, each one named after a famous city (Paris, London, San Francisco, Rome, Istanbul, etc). Each floor features decorations that pay tribute to the city. The London Floor features a double-decker bus and a Tube car. The Rome floor features marble decor that harkens back to Roman times. The San Francisco floor features a miniature version of the Golden Gate Bridge. 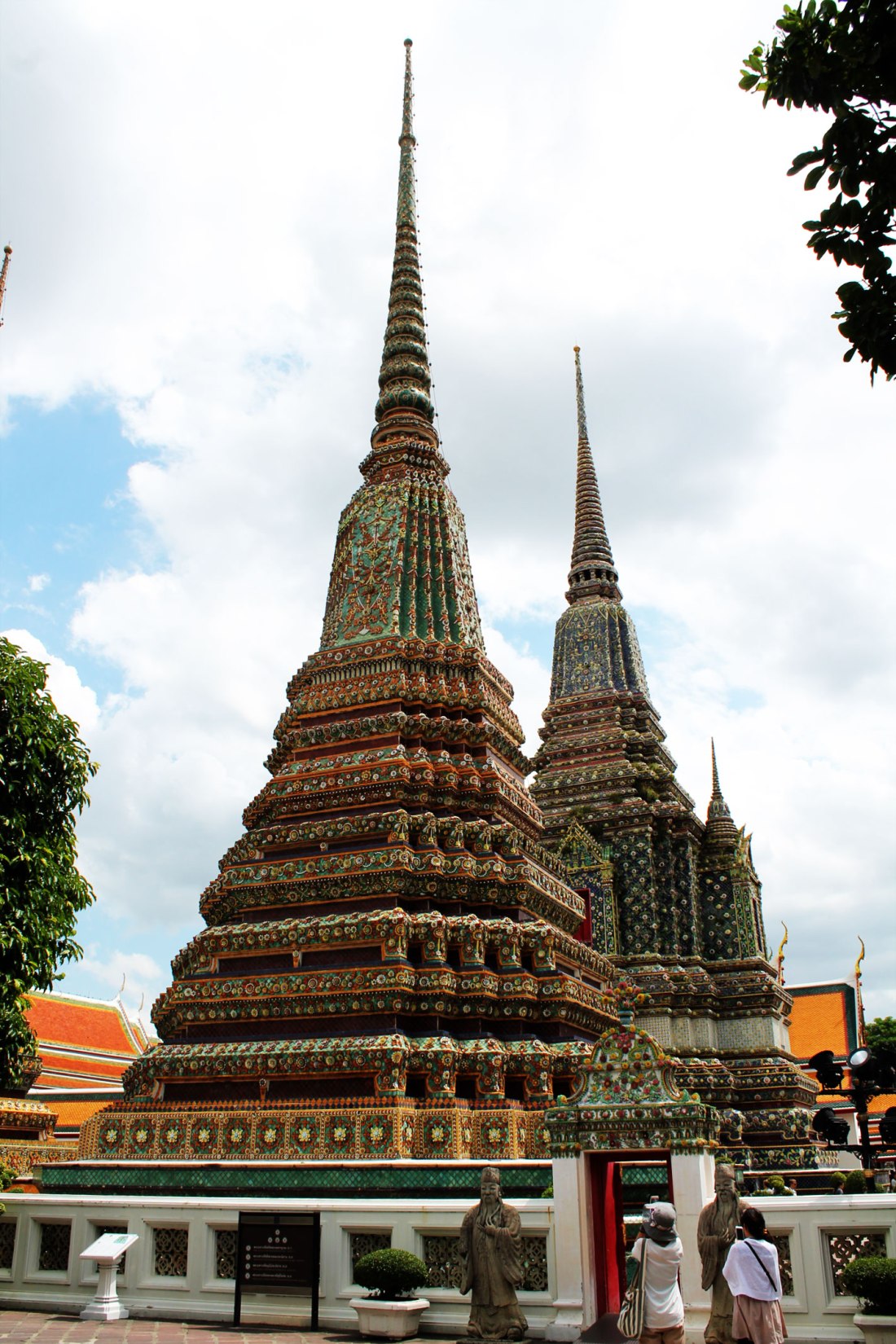 Buddhist shrines are found everywhere. There is even one outside of my condo building.

I have lost approximately five pounds over the past two weeks. Not sure if it’s just water weight or if the change in diet has resulted in the loss. 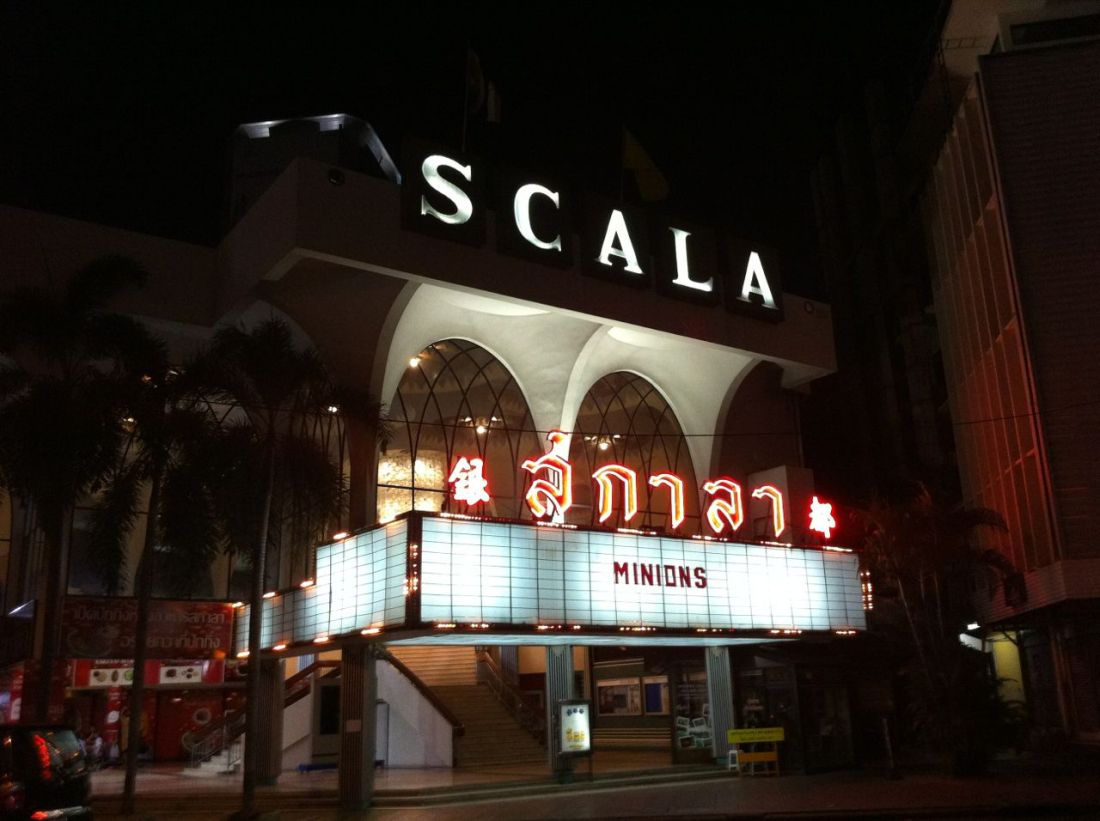 Some parts of the city are very dirty. One evening I decided to visit a popular night market. After getting off the Skytrain I walked up a busy street and up some stairs that connected to an overpass. On my way up, I thought I saw a cat out of the corner of my eye. When I got to the top of the stairs, I realized I was headed in the wrong direction. When I headed back down the stairs, what I thought was a cat turned out to be a huge rat, climbing out of a Styrofoam container with some leftovers in his mouth. 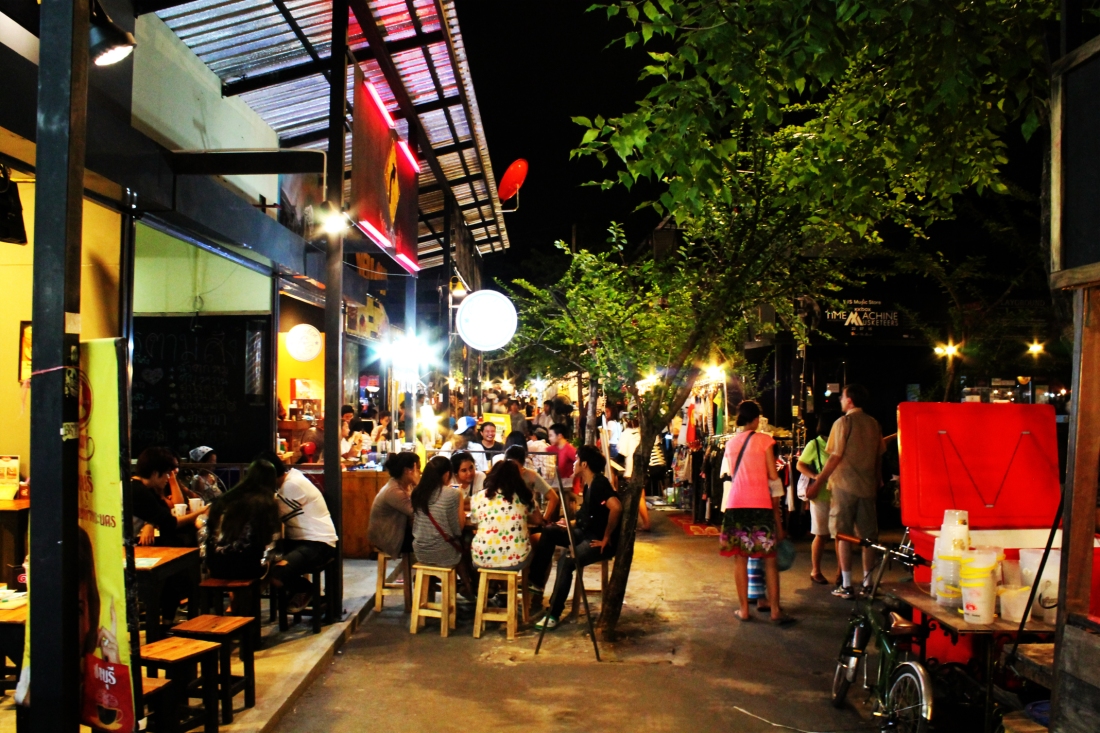 Close to my condo is a large plot of land with a tin-roofed shack. On the plot of land, there are about a dozen dogs running around free. By day, they stay on the plot of land, but at night they come out onto the sidewalk. The other night I was coming back from the Skytrain station and turned the corner to find a pack of six or seven dogs on the sidewalk. A teenage Thai boy was a few steps ahead of me and stopped dead in his tracks. He was pretty rattled. Nevertheless, the two of us carried on and passed the dogs. They didn’t give us any trouble, not even a sniff.

I think Thai people are even more into Smartphones and Tech that we ”Farangs” are. On the Skytrain everyone is using a top-notch smartphone (Samsung Galaxy 6 or iPhone). In my gym, everyone brings their tech along. Many people bring their tablets with them. One woman parks herself on the stationary bike with her tablet to stream YouTube videos and her phone to send texts.

Coffee Shop culture is here too. I am sipping on a cappuccino as I write this. There are lots of good shops with good coffee and good WiFi. This is important to someone like me who works online.

So far I haven’t gotten sick. No digestive problems, no colds. Hopefully it stays that way. I have made sure to only drink bottled water. I even use it to brush my teeth.